The Royal Enfield Himalayan is marketed as a dual purpose motorcycle, billed as a two-wheeled Land Rover, which would put it firmly in the Adventure Bike category. Has the famous old company delivered on its promise of an affordable, rugged, all terrain motorcycle? Nick Tunstill puts one through its paces…

I was lucky enough to be lent a Himalayan for a long term test by Viva Motorent in Barcelona. Trying it out for a few weeks in Spain during the winter gave me the opportunity to really get to grips with the bike and its capabilities. 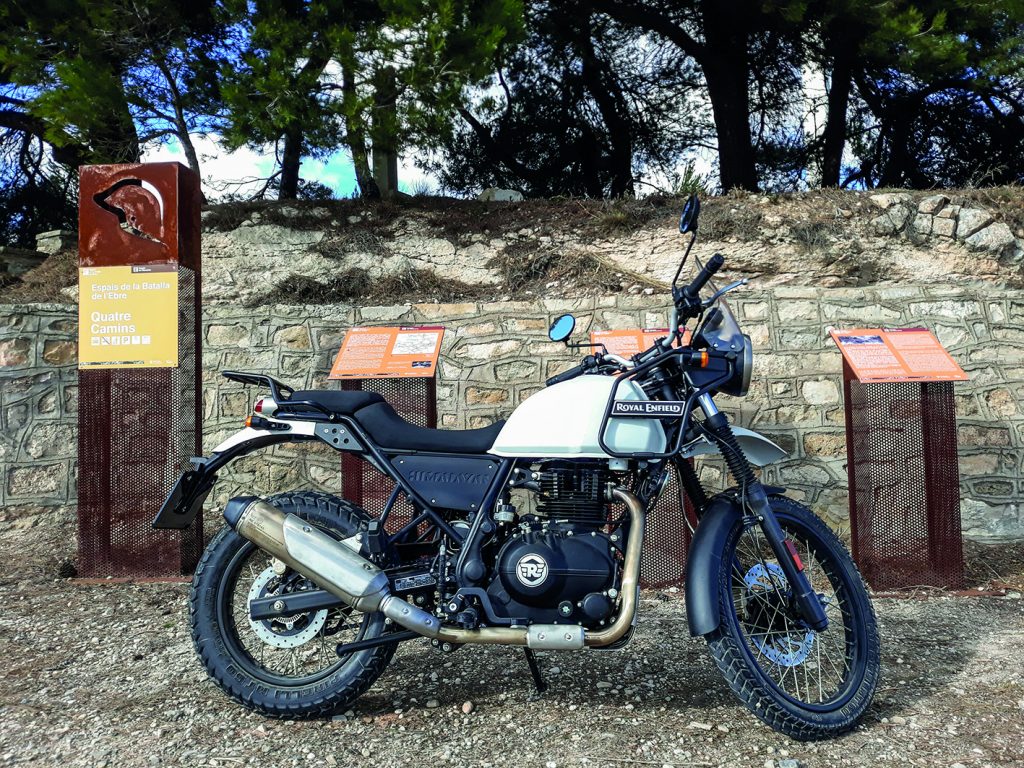 First of all, I think it looks cool, rugged and purposeful with a kind of military despatch rider, Great Escape feel. It oozes practicality over unnecessary plastic bolt on styling. It’s built to do a job, not look pretty in a car park. The silencer is particularly neat, better than some of the recent rather ugly Japanese offerings. The last Enfield I rode was the Continental GT; the mirrors fell off, the speedo flicked about all over the place and the bike had a cheap feel, despite costing around £5000. Not impressed. Well Royal Enfield have certainly improved their design and build quality. This motorbike is well put together and solid. I have had no issues with anything coming loose or breaking despite 1000 km on and off road. Top marks for this.

The engine is an air/oil cooled 411cc, 24.5bhp single with 32Nm of torque. Not figures that will blow the mind of an avid GS 1250 or KTM Adventure fan, but actually very usable in real life. The seat height is 800mm which means it is accessible for most riders. If you are over 6 foot it may feel a little cramped, but for a bike that you can use on the trails as well it’s refreshing to have something so manageable. 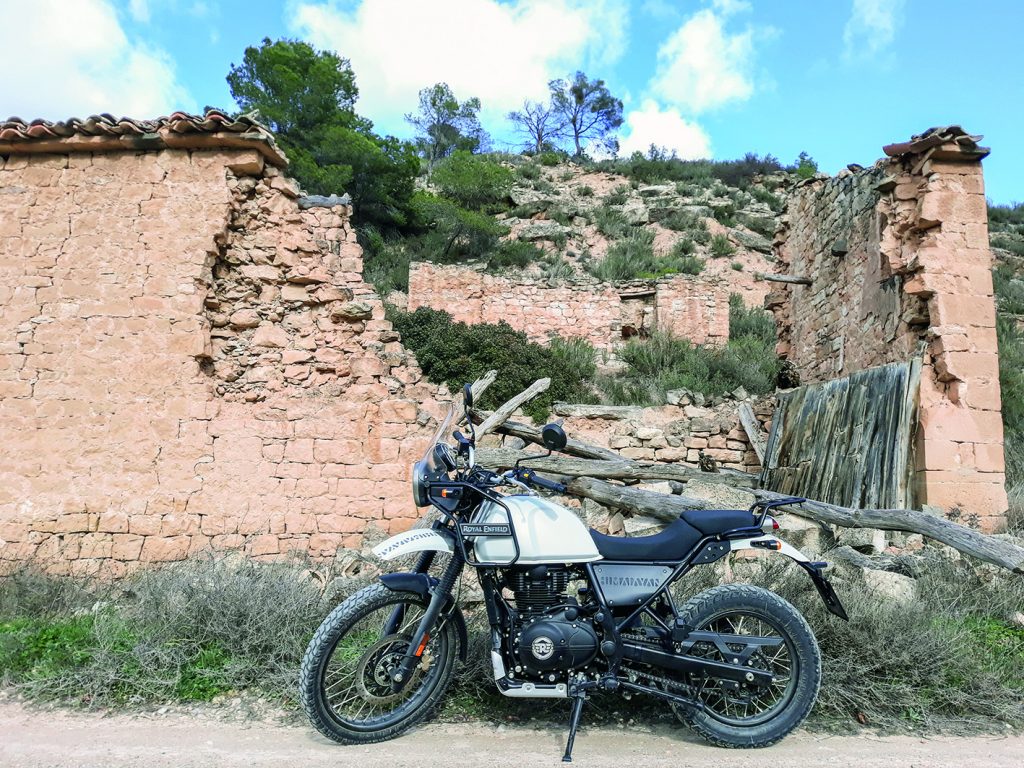 The seat is all day comfortable and the dash is clear, mainly analogue with a LCD panel providing additional information. It even boasts a compass, which sounds a bit odd but actually I found more useful than the rider modes, cruise control and other electronic gubbins I have had on other machines. It is equipped with ABS which can’t be turned off as standard but mine had a switch fitted under the seat that disabled it.

The Himalayan is a very easy motorbike to ride, the relatively torquey single provides enough oomph on and off road without dabbing up and down through the five-speed box. The tank holds 15 litres and this will provide the Enfield petrol sipper with a range of up to 230 miles. How dual purpose is the Himalayan? 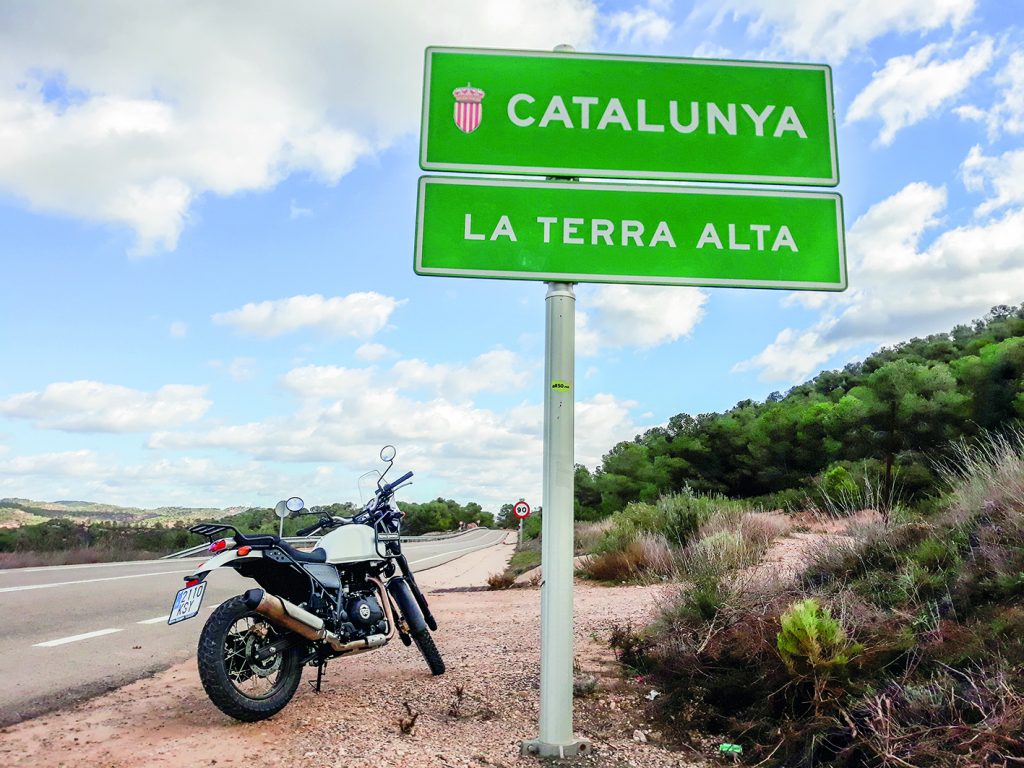 The Enfield has enough power for most road conditions and is fun to ride as well.

Busy motorways are not its forté and it can struggle a bit on really tight twisties due to the 21-inch front, but it will deal with them effectively enough, and any tarmac in between is taken with ease. In an ideal world, a bit more power for those quicker overtakes would be useful and the front brake is adequate but suffers from a lack of feel. The fuel injection works well and the suspension soaks up any bumps along the way. This is a bike to explore on rather than get from A to B as quickly as possible. Despite being a single, there is no buzz or vibey feel and it is a smooth ride. You could ride this bike all day long and get off at your destination still feeling fresh. 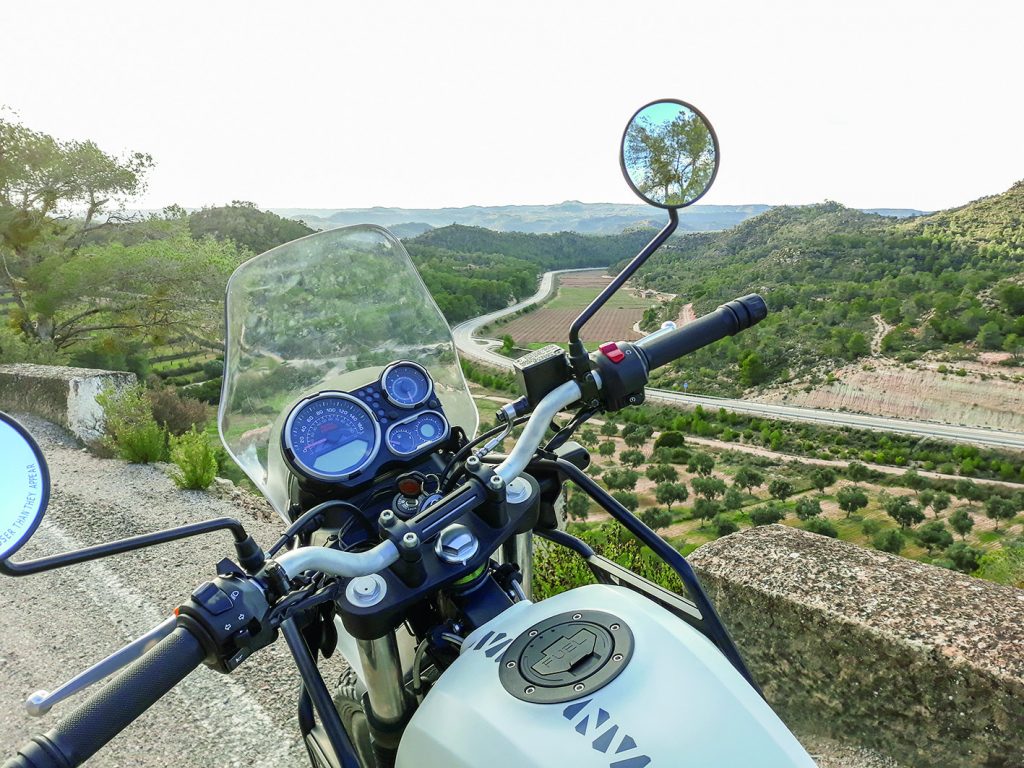 The Himalayan is not an out and out trail bike but is perfectly capable of tackling most non tarmacked roads and tracks with relative ease. The rubber footrest bungs pop out to give a better grip on the metal pegs. The front suspension has 200mm travel and the rear has 180mm. It’s not an enduro bike but will overcome most objects if ridden confidently and appropriately. The low centre of gravity helps with balance, particularly if you are newer to venturing off the asphalt. There is enough low down torque from the single pot to trundle along happily without constantly flicking through the gears. There is a limit to its off road ability though; it is relatively heavy, so if you were stuck on a single track path for example and needed to turn it around in a tight spot, you may wish you had something lighter. However, if you are riding on unmade roads and trails, the Himalayan copes really well and is a pleasure to ride.

For touring at a sensible pace and dealing with a ride range of conditions, the Enfield really does do a great job.

In my opinion, the Himalayan is an excellent motorbike if you are looking at around a 70/30 tarmac/trail split. If you want something for more off road work you may be better looking at something at more focussed. For touring at a sensible pace and dealing with a ride range of conditions, the Enfield really does do a great job. One of the big plus points is that it comes well equipped straight from the showroom. Centre stand, screen, rear rack, front racks and bash plates all come as standard. If you were heading off globe trotting you may add a power adaptor and some hand guards, possible rear luggage frames, but these are not essential. I like the way the Himalayan has been designed and built to fulfil certain criteria and it succeeds on all these fronts.

It’s not perfect, but In an age of hi-tech 170bhp top end adventure motorbikes it’s refreshing to have simpler and more affordable options available. At £3999 you can’t go far wrong with the Himalayan.

Many thanks to Viva Motorent of Barcelona and Malaga www.vivamotorent.es

MotoGusto gets behind the Doc Bike charity raffle

Life on the Edge

Salon Privé and the desirable motorcycles