After reviewing Zero’s DSR a year earlier, I was really impressed; impressed by its comfort, handling, wicked torque and minimal servicing features. For me, the only drawback was its distance and charge times if I wanted to head out for a 150-mile round trip without a bit of mid-way planning and time to recharge its batteries. Can Zero’s SR/F improve on it?

Looking like a proper full-sized bike, the SR/F comes in two colours; a baby-coloured Seabright Blue or Boardwalk Red. In both cases, the colours are stunning. Aesthetically, its streetfighter-like stance means business and presents great kerb-side appeal.

With my man-mass weighing in at 16-stone, 5ft 11-inch and a 33-inch inside leg, my posture and seating on the SR/F is comfortable.

Looking at the customisable TFT dash, it has in-built Bluetooth and phone connectivity controlled by Zero’s Cypher III operating system. It also manages and monitors the battery, motor, charging operation and stability control. The screen is clear and concise with an intuitive menu which is controlled by a switch on the left grip. There are preset modes of Eco, Street, Sport and Rain as well as ten user-programmable custom ride modes.

Setting off, it is quiet as you would expect. With feet on the footpegs, my leg position is a little higher then I’m used to with the seat slightly cutting into my ample derriere. Arms extended, straightening my back, I’d like to be in a more upright position.

As we head into Brighton for an in-town game of traffic frustration, the simple twist’n’go throttle accelerates me away to the tune of an electric-whine and wind gently whistling over its fairless front end. 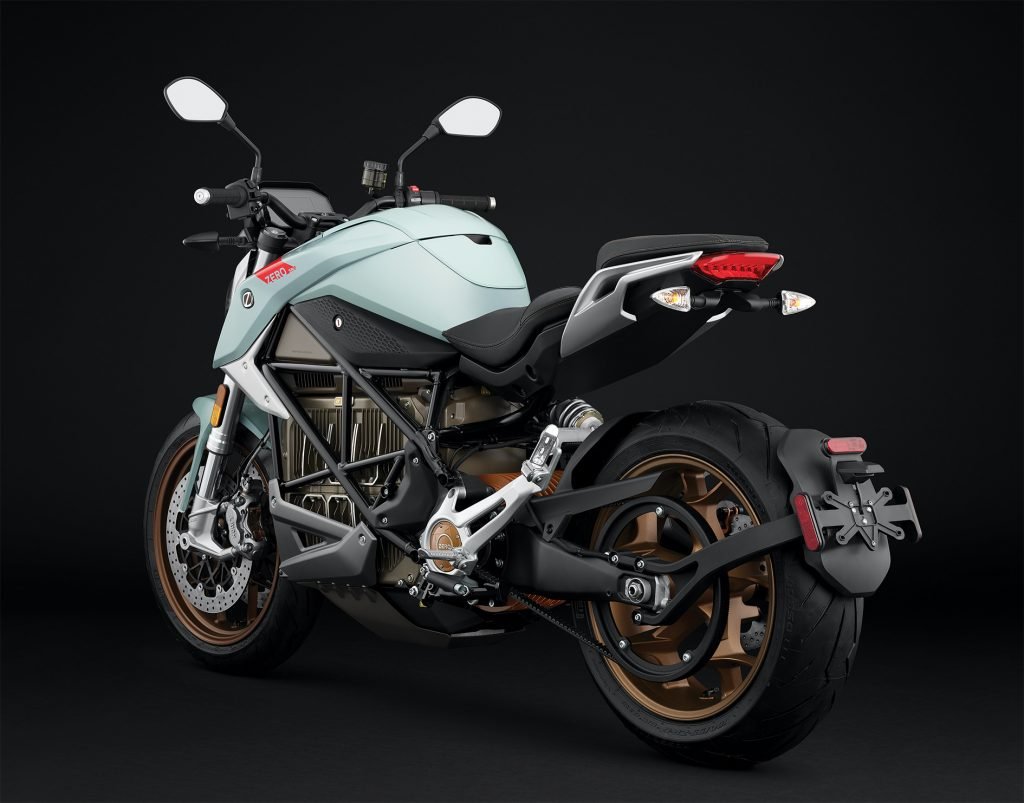 Bumbling along the Sussex coast road in stealth mode, I now possess a heightened awareness for pedestrians who may not hear me coming. At pedestrian crossings, the silence does allow me to eavesdrop into conversations.

Standing-start acceleration to 30mph is achieved with a glove full of nano-seconds. Filtering through traffic in Eco mode, the torque enables you to gracefully slip in between cars with minimal effort. Fully opening the throttle, the SR/F massages your laughing muscles. As I hit the city centre, the traffic stifling progress, I decided to head out of Brighton and hit the open roads to pop the SR/F into Sport Mode.

The power, the acceleration; a superb fit for any track day. Adrenalin flowing, eyes watering, my tongue expelling unpalatable words, the SR/F unleashes its electrifying spirit in all its glory.

With the rolling hills of the South Downs and the road snaking ahead, I open up the throt… flipping heck! The power, the acceleration; a superb fit for any track day. Adrenalin flowing, eyes watering, my tongue expelling unpalatable words, the SR/F unleashes its electrifying spirit in all its glory. At 190Nm (140 ft-lb) torque, it asserts who’s boss and, at 200kg, it solidly and superbly plants itself on the snake’s back as we flick through the bends of Sussex countryside.

The calm after the storm

Popping it into the power-conserving gentile Rain mode, and rocket extinguished, the ride is more relaxed and leisurely taking a little more time to wind itself to 60mph, it provides pulling power akin to a 650cc bike. It proves itself as a suitable ride for a short-blast run into the country on a Sunday morning or as an everyday commuter. Either way, it’s a good choice. 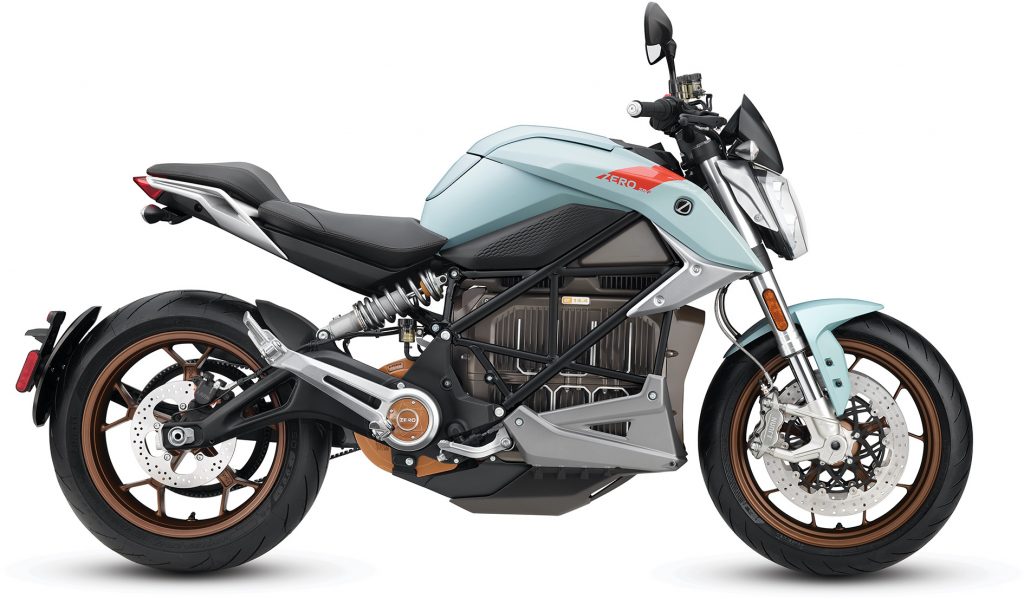 You don’t need to be a mathematician to work out the running costs. With a claimed range of 161 miles in the city, 82 miles on motorways, or 109 miles combined, it’ll cost around £1.83 per 100 miles. Riding 1000 miles would offer approximately £80 in savings compared to the petrol-drinking counterparts. Typically, a 30-mile round trip could give you three days of combined use before it needs charging overnight. 66p to get to work and back?

Except for the J.Juan brakes and Pirelli Diablo Rosso III tyres found on this bike, there are hardly any consumables or mechanical parts on the electric to replace. The carbon belt needs changing every 20,000 miles. The 5-year warranty battery should last for 25,000 cycles — equivalent to 250,000 miles. Who’s going to do that kind of mileage in a bike’s lifetime?

You can see how the savings would mount up over time – well, that is until you look at the initial cost of the bike. Including government grant, you’re looking at around £16,500 for the base version but add another £2k for the premium.

For me, I’d still look at the broader practicalities and variety that combustion-based bikes offer and to hell with the running costs – we’re already used to it. I digress.

The SR/F integrates Level 2 charging that powers up the 14.4kWh Li-Lon battery to full in about under five hours. That said, the remaining 10% of charging can take about half an hour, so you’re pretty good to have a 90% charge in about four hours. Upgrade to the premium bike, and you could see yourself fully charged in just 2.5 hours.

Overall, it’s a prime target for any commuter – that is if you’re lucky enough to have a long-enough extension lead to charge it from your home overnight, but I would say, even if you are not thinking electric, do. Take one for a test ride. It may just surprise you.

Thanks to On The Wheel in Southwick, Sussex, for kindly lending me a Zero SR/F for this first-impression review.

Exotogg – “…the best bit of kit I have bought…”

Fowlers charging ahead with zero-emission bikes

Excuse me pioneering lady riders, may we...

How to learn balance using your motorbike