The Suzuki V-Strom — not a motorcycle previously considered by our moto vlogger, o75, he takes out their latest offering to see what its appeal is all about.

Resembling a DR 750 S Big and giving an ‘80s retro feel is what Suzuki appear to be instilling into its latest model line-up, which isn’t a bad thing; it does offer a different flavour to the motorcycle market. Going against the grain to return to rectangular-shaped lighting, powered by LEDs, its kerbside appeal is aesthetically more satisfying than its predecessor.

The first thing I noted was the screen adjustment. It’s a tad unique, with a clasp positioned out front and out of reach to adjust while riding. Also, catching my eye was the protruding and exposed positioning of the oil filter and, while I would imagine it would be quick to replace, how would it handle being shot at by stones flicking up from the front tyre? 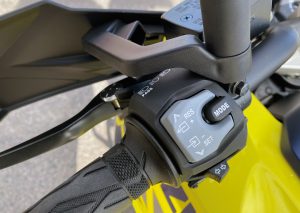 I spotted an accessible handle just on the left under the seat which you can turn to adjust the rear suspension with great ease. Adjacent is the key to pop open the pillion seat that provides a small amount of storage space and comes with a 12V auxiliary power source so you can charge devices on the go or accommodate a puncture repair kit. Another single USB-style charging point can be found alongside the display, where devices can be easily be attached to the convenient mounting bar.

The Suzuki is fitted with both side and centre stands meaning lifting its 247kg wet weight bulk with loaded panniers could be a bit of a struggle. 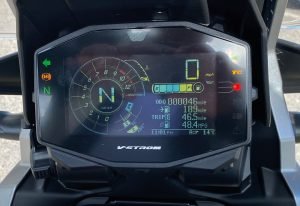 As I sit in the saddle with good posture, I feel comfortable. Visually in front, it’s pleasing to see Suzuki haven’t followed suit with a colour TFT screen that offers the user an abundance of multi-layered menus to find out how the bike is feeling today. It just has a no-nonsense, functional LCD display which simply tells the rider — at a glance — what settings have been applied. Simples.

The handguard design found on the XT did restrict my left index finger from operating the pass/full beam light switch. Other than that, the usual control switches are straightforward, well presented and easy to use with modes, lighting functions and cruise control on the left and with power and a sliding hazard switch on the right.

Awakening the Euro-5 compliant 1037cc 90º four-stroke V-Twin engine is smooth and sublime. It carries a comforting whine to complement with a deep resonating tone enhanced by Suzuki’s standard can.

Having a 33” inside leg, I am on tip-toes. With feet on the ground, I did note the footpegs were catching the inside of my shins. Standing on the footpegs while riding at dead slow speeds made the bike very controllable and stable.

With a distinct large adventure-bike feel, the sizeable 20-litre tank, slightly pushing my knees out, contains enough fuel to push this animal to around the 250-mile mark.

For riders who aren’t into all the switches, gadgets and features that bikes tend to offer as part of the package these days, then this bike will appeal. That said, you’ll find Suzuki’s Intelligent Ride System (SIRS) will aid and enhance comfort, rider enjoyment and convenience. SIRS features a Motion Track Brake system, Hill Hold Control, Slope Dependent Control system, Load Dependent Control, Cruise Control, Suzuki Drive Mode Selector (SDMS) and Traction Control powered by a six-direction, three-axis IMU (Inertial Measurement Unit) sensor. You can get on and go with confidence knowing this bike has you covered.

With a new ride-by-wire throttle, you can adjust its sensitivity and response with a push of a button using the SDMS. Option A is sensitive and snatchy, while C is toned down and offers a lot more comfort.

When opening up the throttle on A-roads, it is swift. The unassuming V-Twin responds with a lusty ear-reacting roar as we safely overtake vehicles returning to its socially-acceptable nature as we resume road position. I like that. I like that a lot! 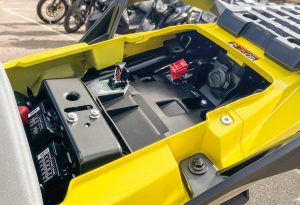 Hitting road-topped hills exposed to strong side winds, the XT remained resolute; my point proved as I realised I was riding with one hand. I wonder how much work its systems were providing without me knowing? Sitting quite proud, with the screen being in its highest position, serving its purpose well as it deflected turbulent air, reducing head buffering to non-noticeable levels.

As we rode into the curves, the flippability was a little lacklustre. To be fair, it is an expected response from a bike like this.

With two 310mm disc brakes and a 265mm on the rear, the braking is responsive and natural to the rider’s commands. That said, braking downhill on a corner slowing towards a junction, I did encounter a minor squirrel from the rear. With the 50-mile-young Bridgestone Battlax Adventure A41 tyres not having been adequately scrubbed in, the brand new bike instantly responded. Very reassuring. 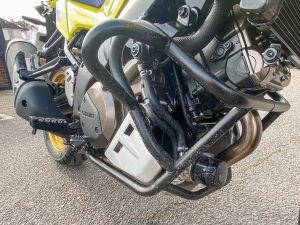 Strange position for an oil filter?

The wide-aspect mirrors work well and, noting minimal visual vibrations, I can now see who I am leaving behind.

The cruise control initially took a little understanding but, once locked into my grey matter, I had it sussed; I just needed to make sure I was in fourth gear at a minimum of 40mph. Set, then relax. You can incrementally increase/decrease the speed at the touch of a button.

Riding slowly behind practically stationary traffic towards a junction, it remained stable even at 1mph. I popped my foot down, and the footpeg bit my inner shin.

Overall, the riding experience was pleasurable and confidence-inspiring. Taking its £11,299 price point into account, options, build, enduring quality, practicality, and its non-intrusive riding aids, the Suzuki 1050 XT was hitting the sweet spot. I could see myself on one of these riding the roads of the Picos de Europa once again.

With the absence of heated grips, I would most certainly add a pair alongside a guard to protect the radiator.

Visit your local Suzuki dealer and take one for a demo. I think you could be pleasantly surprised. If you’re in Sussex, then do contact On The Wheel Motorcycles in Southwick, Sussex who very kindly loaned their demo bike for this review. Tell them we sent you.

If you want to see this bike in action, why not watch it now on my o75 YouTube channel? While you’re there, please do like and subscribe, drop a little line and say ‘hi’.

Exotogg – “…the best bit of kit I have bought…”

Mystery and history tours of Cumbria

Take your seat at the Armchair Adventure...

The dark side arrives: Yamaha’s MT-09