The search for the perfect all-round adventure bike continues. Les Smith hops on board Yamaha’s new Tenere 700 to put it through its paces.

This bike has been in the making for some time now and, as anticipation has grown and the long-winded celebrity endorsed advertising campaign has unfolded, I have been eagerly awaiting its arrival.

But it’s here now and, with the journo bun fight in warmer climates over, the bike is finally on UK soil and a trickle of Teneres are in customers’ hands. My North Kent (local) Yamaha dealership, A2 Motorcycles, decided to buy their own bike for test rides.

The Tenere has got the 700cc lump from the MT O7 and runs on slightly different gearing for better off road abilities. I wanted to look at how it rides and handles on the road and a little soft trail stuff. However the bike I rode was brand new so it needed some gentle running in, especially bearing in mind it also had brand new tyres and it was raining!

The bike looks great in the grey livery; little Tenere details brought out the character of the motorcycle and there is a nice pair of crashbars on the bike too, a good idea for a demo bike. Initial inspection picked up on details like the stand over ride height, which I know is a factor for some. I’m about a 30-inch inside leg and 14 stone (in bike kit) and I could get both feet firmly on the ground, which is reassuring.

The adventure bike market is full of big, tall bikes and I’m sure that’s what puts some riders off this genre. The Yamaha Tenere is lighter than most of the competition, coming in at just a few kilos more than a rally kitted KTM or Husky 690/701. It’s not competing with the big boys anyway, this bike is for the discerning adventure rider who is not obsessed with bhp and gadgets.

The dash board is very clean, none of the PlayStation TFT stuff, just a very clear display, giving the rider all the information that is needed. I don’t need to know the ambient temperature in Guatemala.

It was time to head off on the slime covered Kent roads, in the heavy rain, on new trail tyres, on an unfamiliar motorcycle, mmmm lovely. Anyone who has ridden on new trail tyres in the wet will sympathise with me as the roads were terrible, greasy and flooded in parts so it was careful progress. The Yamaha’s engine was a real gem though, so smooth for a twin and very easy to ride in these conditions. This definitely transfers to off-road riding, giving great control. Smooth drive and good low rev pick up made for secure riding between bends and hazards and the bike felt very sure footed. 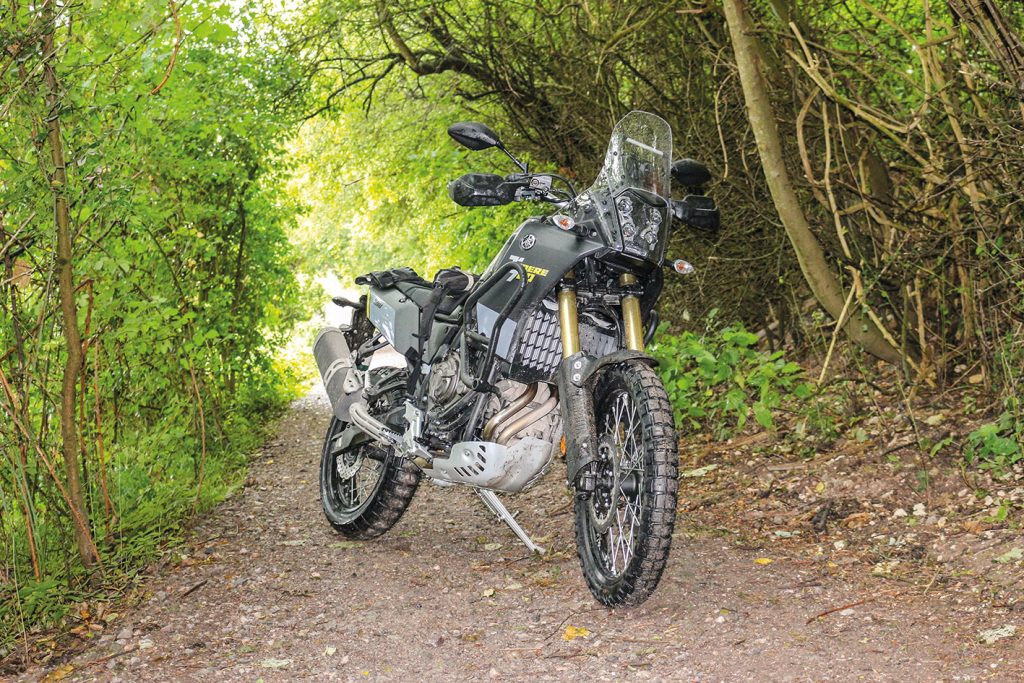 When the roads opened up and the tyres got a little more bedded in, I was able to make decent headway on the wet stuff. The Yamaha 700 ten is a very stable package. I didn’t adjust anything suspension wise as it’s a new bike so needs to bed in, but I reckon even when it is run in it’ll be great on standard settings. The suspension was very smooth and progressive and there were no surprises on the rough, pothole strewn roads. The brakes were strong and precise, allowing for good tapered braking in the wet, which again bodes well for any off road jaunts, And the Pirelli STR tyres are great.

I took in a few sections of dual carriageway on the test route and, even at running-in revs, there was enough to hit 70 mph comfortably. The Tenere accelerated with ease, so I reckon when run-in and given its head, it’s going to be a tidy mover. The MTO7 road bike is good for 120mph+ and I reckon this adventure version will have good road performance. Good gear choice made overtaking easy and handling in fast, open bends felt secure even in the heavy rain. 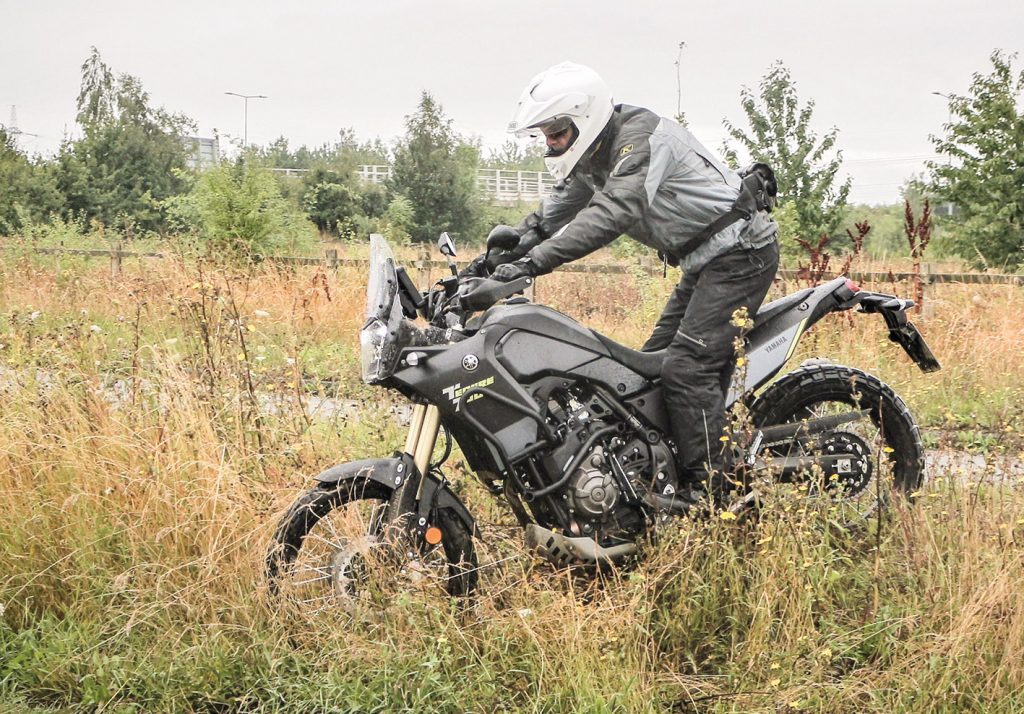 A little dirty business was called for as it is an adventure bike after all. I looked up one of Kent’s gentle green lanes and paced a few passes, just to get a feel for the bike on the pegs. I can see this bike being very effective in a good pair of off road hands. It feels light on the move and very well balanced on the dirt.

The Tenere has been very well thought out, that’s hopefully why it took so long to hit the streets. Little details work, such as the grab handle mouldings on the underside of the rear of the bike to help when moving. The side stand already has a decent-sized foot, off roaders will know what I mean. The dash provides all relevant info and the crossbar is purpose built for navigation kit. Simple things, like being able to unbolt the rear foot rests for solo dirt riding, are a bonus.

On the dirt, the Tenere was well balanced and, once in off-road mode, (which is very easy to access with just one button) the bike becomes even better, offering plenty of control. The STR tyres were fine on the wet gravel trails, offering good forward drive. They feel a little vague on wet mud, but these are dual sport tyres not enduro race rubber.

Off-road the progressive brakes allowed positive braking without the fear factor offered by some super dooper brakes found on bigger bikes. Yamaha have hit a very good medium with the “7 Ten”. It feels lighter than say the very competitive 990 adventure KTM.

The Tenere is a modern yet uncomplicated machine. The things that matter like suspension, a decent smooth engine and rideability are well up to date, which appeals to me in this world of auto-blippers and hill start gadgets.

Riders who are into adventure riding, and by that I mean some off-road travel, will love this bike. If you want a sub-200 kilo adventure bike with good ergonomics and the ability to tour the world frugally, you should take a serious look at this Yamaha.

If I had to choose a bike today for a 2500 mile TET trip (Trans Euro Trail) across Europe the Yamaha 700 Tenere would be high on the short list, if not at the top.

For the price, £8,700, this bike is in my opinion the best value Adventure Bike on the market.

If you feel you need complicated electronic suspension, and have a computer science degree allowing competent operation of the computerised on-bike mode control systems then there are other, significantly more expensive bikes, available for the PlayStation generation.

I would recommend any adventure rider, either current or future to have a look at this bike and ask yourself, what do I want from an off-road capable adventure machine? The Yamaha 700 Tenere may just fit the bill.

Many thanks to A2 Motorcycles of Gravesend, www.a2motorcycles.co.uk