If I were to ask you to name a bike manufacturer beginning with the letter H chances are you’d reply, Honda or Harley Davidson. Like me, you probably wouldn’t have the brand Herald spring to mind, but maybe it’s time that changed. 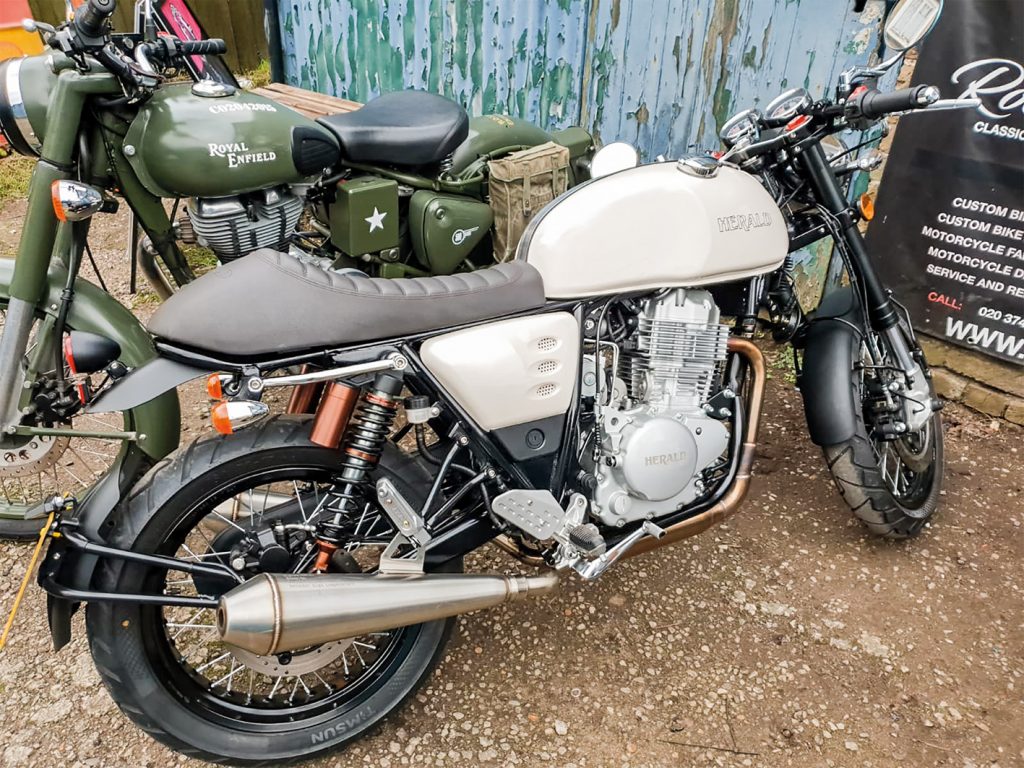 Herald Motor Company are based in Cambridgeshire and specialise in the design and creation of dapper yet simplistic motorcycles. Their aim is to ‘put a smile on the rider’s face and not a hole in their pocket’. They offer a range of stylish motorcycles ranging from 125cc right up to 400cc, with a 500cc in the pipeline.

Today, courtesy of a lovely gentleman by the name of John Rooster — owner of John Rooster customs — I was going to ride not only my first Herald, but also be the first journalist in the country to ride the Herald Café 400 (perks of the job, aye).

The way this bike looks is really something special. Herald say, “the Café 400’s vintage looks will satisfy your sixties’ racer nostalgia”, and if I had been around then and knew how to type up this article as I’m doing, I’d say it does exactly that.

The Herald has captured the retro image with the reliability of modern mechanicals. It features among other things; twin front discs, adjustable front and rear shocks, clip-ons, and a stylish tank. The cream paint coupled with the twin exhausts give this machine a proper ‘head turner’ status. Stationary admiring over, it’s time to start it up and see what it’s like out on a blast.

The single cylinder, Honda-based engine, fires up with a delightful rumbling spitting out from the two exhausts; even on idle this has a lovely soundtrack. The seating position is upright and comfy, with the clip-ons an easy reach so you don’t feel unbalanced. The bike has an aura of quality, I especially liked the attention to detail around the top yoke. 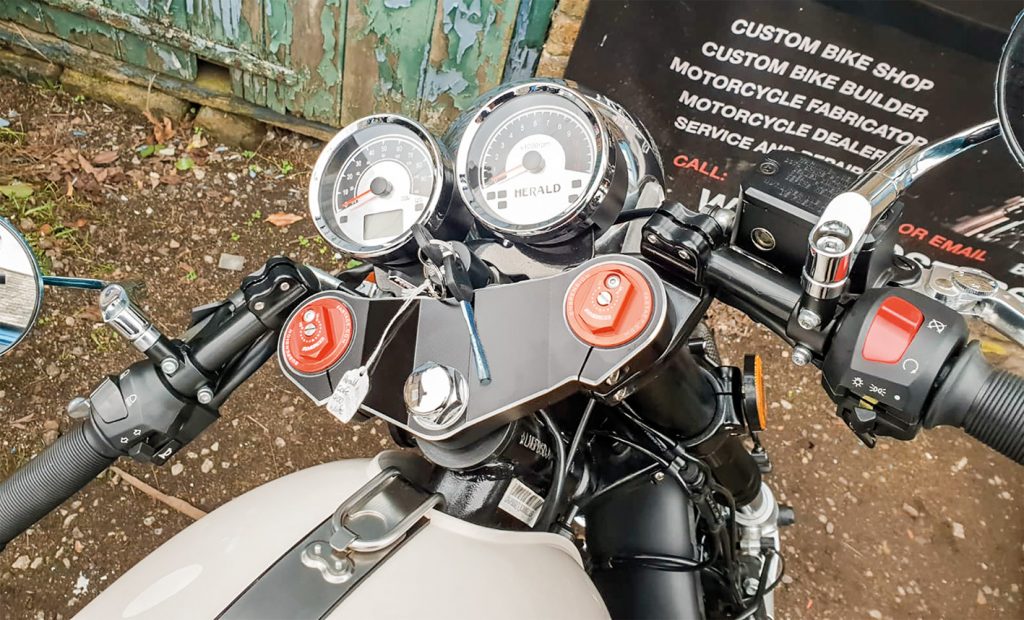 Out on the road, and leaving a traffic-clogged village, I was able to stretch its legs. The engine, though boasting 27bhp, pulled willingly as I started to make good progress. I did find gear changes awkward though because the lever hadn’t been adjusted to suit me. The five-speed box was smooth and positive with neutral being selected when opted for, and not when you’re leaving a bike meet trying to show off. Why does that always happen? Braking was reassuring on a damp surface, and had a good feel through the levers.

Cornering on the bike felt genuinely fun, with a nice low centre of gravity. Being 165kg (dry) it was easy to manoeuvre whilst filtering, when reluctantly parking it and for the end of the test ride. Despite nervousness brought on by the responsibility and the cold, I thoroughly enjoyed my time spent in the saddle as it felt so flickable in the corners and planted on the straights. Unfortunately, I couldn’t give it ‘free rein’ as it was new.

In summary, I believe this bike would be great for riders who don’t want the expense, complication and weight of other mainstream products. At £4,499 with a generous two-year warranty, Herald seemed to have achieved
its aim.

Find out more about the entire Herald range at www.heraldmotorcompany.com

Is inflation good for you?